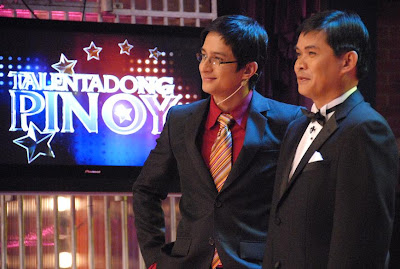 
RYAN AGONCILLO realized that his TV5 show “Talentadong Pinoy” has attracted a loyal audience when strangers started stopping him on the streets, asking if they could audition.

The show has gathered a motley crew, including a beat-box trio, a man who peels coconuts with his teeth, snake wranglers and contortionists.

While Ryan was car-racing in Clark, Pampanga, an Aeta kid stood in his way and belted R&B tunes.

Talent scouting is part of his job as host—quite a stretch from his first gig on ABC 5’s “Philippine Idol.”

Every week, Ryan explained, the show is guaranteed to discover talents that are either awe-inspiring or amusing.

Among the most shocking so far was a blade eater. “While I was interviewing him, I could smell and see blood,” Ryan recalled. “Maybe he got nervous. But he wasn’t seriously hurt.”

Such unexpected moments make the show a roller-coaster ride for audiences and show regulars (aside from Ryan) Audie Gemora, Cherie Gil, John Lapus, Eugene Domingo and Amy Perez, among others, who are also called “Talent Scouts.”

“I thought they would be jaded,” Ryan said. “After all, they’ve been in the business for so long. Still, they are truly entertained. Amy once asked a Talentado, ‘Can I hire you for my son’s birthday party?’”

Indeed, some Talentados have been spotted by booking agents and clinched assignments through the program.

Has Ryan found a singer for his forthcoming wedding to Judy Ann Santos? He laughed and said Judai herself has singled out a ventriloquist with five dummies.

Judai acted as a Talent Scout for Ryan’s birthday special, to be aired April 18 (he turned 30 on April 10.)

Will the ventriloquist be at their wedding? Abangan.
Posted by WANLU at 5:56 AM No comments: